At the beginning of the Year of the Horse, 2014, while horses were “at the gate” about to gallop into my life, bringing with them undreamed-of joy, I saw a picture on Facebook of a beautiful Mustang mare, Angel, who had been rescued and was needing a forever home.  It was love at first sight for me.  There are so many intangibles that I can only remotely describe how or why I loved her at first sight.  Perhaps it was the pure sweetness and love in her eyes… with a twinkling potential of sassy 😉

One can only imagine what Chris, the founder of Mustang Rescue Network, thought, when I messaged her almost immediately that I wanted to adopt her!  When she questioned me about my horse experience and qualifications to adopt her all I could answer was, “Well, I’m leasing a glorious mare (Serenity) and currently caring for her daily as she had injured herself badly and needs a lot of TLC.  But I’m somewhat new to horses…”  (Oh yes, Novice Horsewoman indeed!)

I can now imagine Chris gently shaking her wise head and even more gently preparing how to say “No” to me 🙂  Which she did!  But that began a friendship between us, with the sweet Mustang mare as the bridge.

Angel was found in Georgia wandering down a road with many mysteries surrounding how she came to be there. 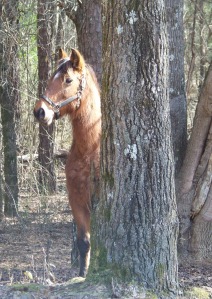 Angel in the woods. Courtesy of Chris L.

Her BLM brand told only a tiny bit of her story. but allowed the Rescue Network to identify her western origins and give an approximation of her age.  She had been “gathered” in Nevada in 1996 at approximately 1 year of age and adopted at about 1.5 years of age. How she got to Georgia is unknown. When they contacted the person who was currently in possession of her, he claimed her to be an abandoned horse that he knew from working with her for some people in the past. He went to their place to find it empty and figured they had abandoned her near where he usually rode. He seemed to want the best for Angel…

Mustang Rescue Network folk were able to acquire her legally and foster her while they put weight on her and slowly began discerning where she could be happiest in a forever home. 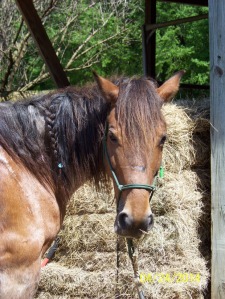 Chris has had mustangs in her heart and soul since she first read Mustang, Wild Spirit of the West  ( by Marguerite Henry) as a young girl. She had ridden often with her grandmother and grandfather when young and had had the love-of-her-life horse as a young woman in upstate New York before moving to Georgia.  Angel’s appearance in her life began a wonderful series of events which began with her creation of the Mustang Rescue Network.

Over the next few months I began contributing to Angel’s care through the Mustang Rescue Network and Chris and I kept in touch about her progress.  I was also privileged to receive extra pictures of her physical progress as she gained her weight back, got some gloss in her coat and began some gentle training.  I never stopped hoping that, as I began to get more horse experience, maybe just maybe Chris would eventually let me adopt her!

But life had other ideas ;)…

I knew, the minute I actually met Chris and Angel in person in Eatonton, Georgia and played with her in some training games, that as much as I adored this pretty mustang, I wasn’t “the one” for her.  Chris was. 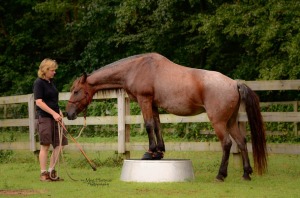 Angel and Chris play together. Courtesy of Meg Hartman Photography

Christine and Angel play together. Courtesy of Chris L.

The months rolled on and each time I went to Georgia I met with Chris and Angel enjoying exquisite times being in the presence of this very special mare.

It never ceased to hurt my heart to see her brand and the scars in her precious face where someone had left a halter on, obviously for years, so that her face also seemed “branded” with these halter scars.  However, sweet Angel didn’t seem to notice those things and became more and more herself as she felt safe, nurtured and had her hoof issues tended to.  The sassiness, only guessed at from the look in her eyes in early pictures, came out in her personality, which, combined with her sweetness, was completely irresistible!  ” Little Miss Sweet and Sassy” (as we nicknamed her) would walk around in her pasture with the cutest little swing in her hips and an adorable swish of her tail. 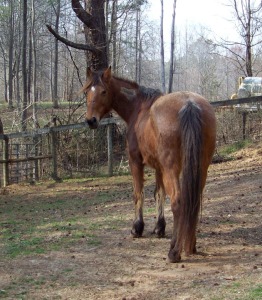 Angel Enjoys Her Life In The Pasture! Courtesy of Chris L.

Anyone and everyone who met Angel, fell in love at first sight.  Since words cannot describe the loveable essence of this beautiful mare, I’m hoping the pictures I include do 🙂

When I first began writing this story about Angel, I had trouble getting anywhere with it.  I kept procrastinating.

Now I know why…

On many different levels, Chris had trouble conceiving that Angel could and should be hers.  It was so interesting to see how happy they each were with each other, how connected, and yet, there seemed to be some unseen barriers that Chris would need to overcome to be able to actually  say, “Angel and I belong together”.

Chris patiently and persistently worked through her hesitation.  As Chris came near to working it through, I was  honored to be with them both the day Angel let HER desires be known! 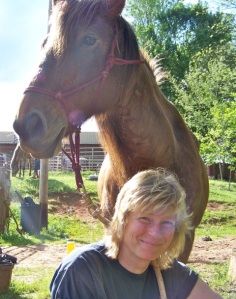 We had been hand grazing Angel and sat down on a log to chat about Angel’s prospects and if Chris was just about at the “place” inside herself where she could see herself adopting her.  In an utterly silent yet breathtaking manner, in the course of our conversation, Angel stopped grazing and came and stood right next to Chris, in quiet stillness, for almost a half an hour as we chatted.

In those minutes, I think Chris and I BOTH knew that Angel was stating what she wanted.  To be with Chris as her forever human.

Within a couple of weeks, the last internal barriers were torn down and Chris knew beyond any doubt that she and Angel would spend their lives together. She began the adoption process!

5 thoughts on “Fourth Confession: How I Fell In Love Online….With A BLM Brand”

Follow Confessions of a Novice Horsewoman on WordPress.com
Join 1,109 other followers

Because we’re all recovering from something.

Letters From The Clouds

Hope In All Forms

The hopeful path for those fighting cancer

In life, expect the unexpected!